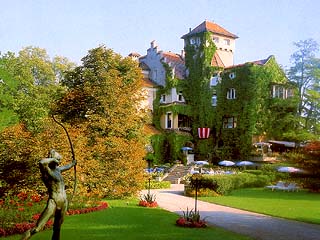 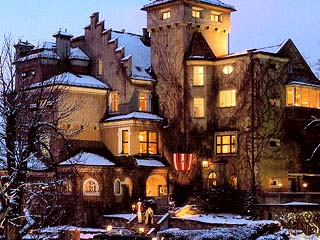 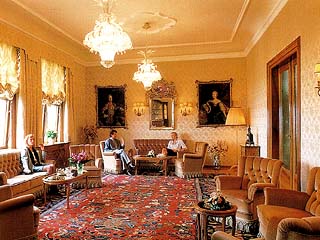 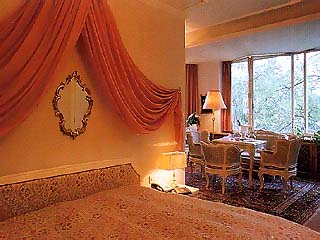 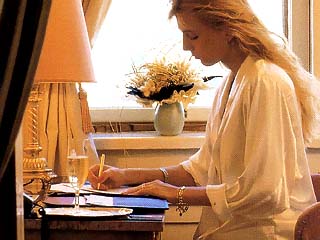 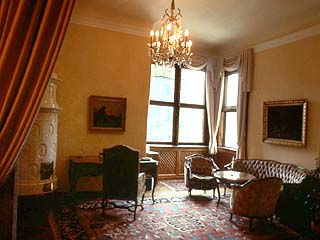 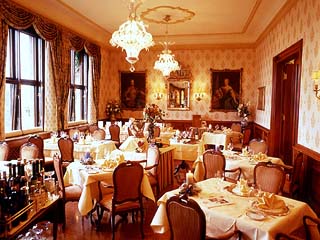 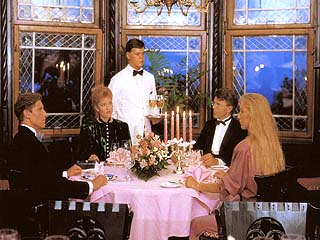 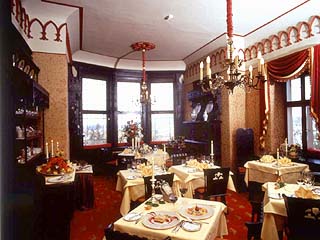 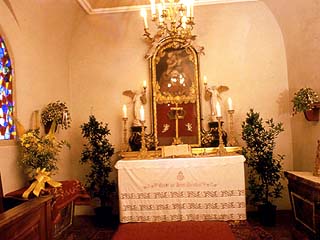 The quintessence of elegance above the roofs of Salzburg lays the Castle Hotel Schloss Monchstein with panoramic views over the city.

1350 The Monchstein was mentioned in a document for the first time as "Tetelheimer Turm".

1531 The estate became the property of the Froschlmoser family, who constructed the chapel and the tower.

1622 The monks of the Muelln monastery became the owners of the property. At this time, the Archbishop Paris Lodron built the fortifications, which surround the castle.

1654 The Castle was bought by the Convent of St. Peter to provide a relaxing environment for the "Gelehrten Herren Professoris". In light of this fact, it was referred to as "Professorenschlessl".

1661 On August third, the Chapel was consecrated and during this time the Tower Room was used as an astronomic observatory.

1815 Catherine of Russia and the Duchess of Liechtenstein were just two of the noble guests who enjoyed their stay at the Monchstein Castle. The poet Alexander von Humboldt wrote very enthusiastically about that "small piece of paradise" in the city of Mozart.

1887 At this time Banker Leitner became the owner of the estate. He built the first elevator along the outside of the Monchsberg. He was also responsible for building a road up the hill.

1895 The city of Salzburg bought the Monchsberg elevator and following the Second World War it was reconstructed within the mountain.

1948 During this period, the Monchstein Castle was transformed into a hotel.

1956 Family von Mierka bought the Castle and transformed it to the only five star Castle Hotel in Salzburg.

1984 The Schloss Monchstein was included in the "100 Best Country Hotels in Europe" by Klaus Besser.

1986 B.I.D. awarded the Monchstein "The American Gold Star for Quality".

1988 Start of the membership with "Relais & Chateaux" - "The most beautiful hotel-chain in the world".

1989 The Castle celebrated its initiation into "Salzburg’s Wedding Wall" and three years later into the "Castle – Christening - Register".

1993 Castle Restaurant Paris Lodron was awarded with two Gourmet Hats from Gault Millau, a sign of excellence. With this accomplishment the Paris Lodron gained the reputation as the best restaurant in the city of Salzburg.

1995 The Castle Chapel witnessed the five hundredth couple to say, "I do".

1997 The "Monchstein Panorama Path" was opened. This romantic walk leads to the Monchsberg lift that is the connection to the historical centre of the festival city.

2000 The Gabrielli-Schwarz family acquired the Castle.

2002 The Hotel closes for reconstructions

2003 During the comprehensive reconstructions - carried our with lots of love to the details as well as with the due respect regarding the history of the castle - another rooms and several public areas were added. Well timed with the beginning of the summer music festival season, The Hotel reopens in its unique splendor.

Now "Salzburg’s Success Team" has the pleasure of welcoming you at Hotel Schloss Monchstein.

On the Monchsberg above Salzburg's old town, just seven minutes to walk to the city center.

For private and banquet functions etc. (with daylight)  Capacity: up to 22 persons Size: 41 m²

History: The chamber itself and the furniture origin from the era of the famous Salzburg archbishop Paris Lodron and are a perfect example of monumental protection.

The Smallest Restaurant Of The World

Your ideal spot for exclusive dinings and conversations Capacity: up to 4 persons

Truly unique: This restaurant is situated in the castle tower with a breathtaking view. The perfect ambience for exclusive dinings and conversations.

The other bar concept! Enjoy the wintergarden feeling! Capacity: 10 seats resp. up to 25 Standing Rooms

Apparently under the open sky you can welcoming your guests and enjoy your first – or maybe last – drink of the day!

The large terrace enables you to have a wonderful view over Salzburg or into the park Capacity: up to 100 seats and 200 Standing Rooms

We are welcoming you at our terrace for light dishes throughout the day as well as for classic and fancy drinks until late at night. For bigger gatherings and functions the terrace can be sheltered with a tent roof and consequently becomes a very special location.