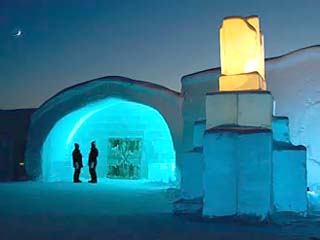 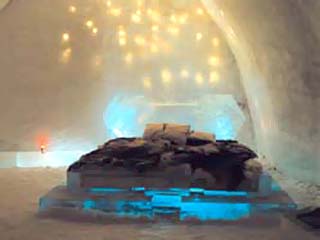 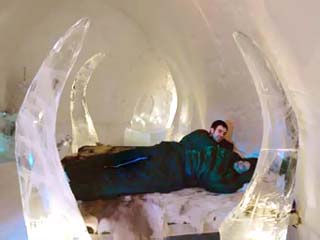 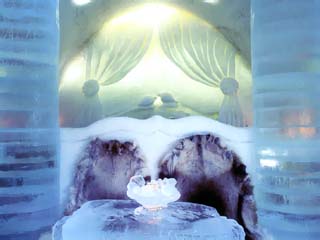 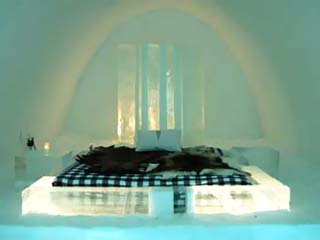 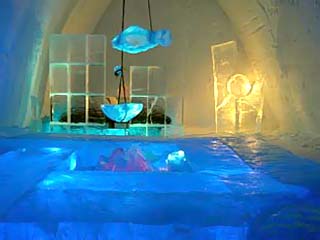 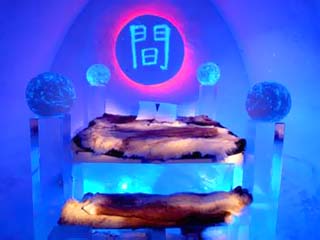 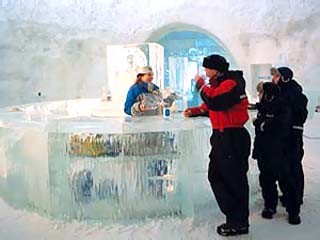 Imagine a hotel built from thousands of tons of snow and ice, and re-built every winter- that is IceHotel in the little village of Jukkasjârvi in northern Lapland, Sweden. In Ice Hotel there are double rooms and suites for overnight guests, a lobby, a pillar hall, film auditorium and of course the famous Absolut Icebar - where folk from all over the world socialize till late.

In Swedish Lapland, 200 km north of the Arctic Circle, lies the village of Jukkasjarvi on the River Torne. Jukkasjarvi in Saami (Lappish) means "meeting place ", which is what the former Saami village has been for half a millennium. Icehotel AB, the company that runs Icehotel, has worked with tourism since the mid-1970s, and offers a wide range of activities such as white-water rafting, fishing, visits to a Saami camp, reindeer and dogsledding tours.

Before Icehotel, very few tourists came to Jukkasjarvi during the long, dark, cold and snowy winters. In 1989 however, Jukkas AB (now Icehotel AB) decided to look upon winter as an asset instead.

It all started when, in 1989, some Japanese ice artists visited Jukkasjarvi, resulting in a much talked-about and written-about exhibition of ice art. Shortly afterwards, in spring 1990, a cylinder-shaped igloo was built directly on the ice of the River Torne, where an exhibition by the French artist Jannot Derid opened. Hundreds of visitors stared in amazement at the 60-square-metre art gallery, which was given the name Artic Hall. One night, some guests even spent the night there, in sleeping bags on reindeer skin - and the next morning they were ecstatic about the experience. Artic Hall was never meant to be used as a hotel, but the guests, well rested, assured us that it had been a warm and intense experience Icehotel, now in its thirteenth year, is continuing its successful and celebrated career as the world's biggest hotel made entirely of ice and snow. From its modest beginnings as a single room thirteen years ago, Icehotel has grown to 5,000 square metres built of 30,000 tons of snow and 4,000 tons of ice.

In the winter season 2001/ 2002, more than 14,000 guests spent the night in Icehotel and 37,000 day visitors walked in through the reindeer-skin covered doors. In this 60-room wintry fairy-tale land, there is a hotel reception, hall of pillars, Iceart exhibition, Absolut Icebar, Icehotel cinema, the fantastic Icechurch and of course hotel rooms. In the evening, the guests assemble in Absolut Icebar to have a drink "in the rocks" from iceglasses sculpted from the ice of the River Torne.

The Icechurch is a consecrated room of snow and ice in which church services, weddings and christenings take place.

At the end of October, around thirty local artists and builders start work, ahead of the arrival of the first guests in mid-December. Snow canons and front loaders help to form the snow over arched steel sections, some as big as 5 metres in height and 6 metres across. Two days later, the sections are moved and are ready to use somewhere else. The ice pillars are then put in place to give extra strength to the self-supporting snow arches. In March, ice is harvested from the River Torne with the help of tractors and special ice saws which were developed here in Jukkasjärvi. The pure river water, in combination with the fast-flowing current, gives crystal-clear ice. The ice blocks, weighing almost 2 tons, are stored in our freeze-house for export and processing. Much of the stored ice is used in constructing next year's Icehotel.

By the beginning of December, the main building is almost finished and the interior work begins. This continues until the end of January. With an indoor temperature of around five below zero, working conditions are relatively comfortable compared to the outdoor temperature, which can drop lower than forty below zero. Working to late in the evening, the sculptors cut and work the ice to create things like interior decorations, windows, doors, pillars, furniture, lamps and naturally - sculptures. Specially invited Swedish and international guests artists come every year to design the décor in certain rooms.

The varied styles of the many artists, together with the properties of the ice, create a unique atmosphere: not unlike that in a museum, in fact - filled with magic, mystique and surprises for the visitors as they wander from room to room.

In winter 2000, a new chapter in the story of Icehotel AB began when operations were extended across the Atlantic - and co-operation began with Icehotel Québec in Canada. In the beautiful area of Duchesnay outside Québec, Icehotel Québec opens in January and closes at the end of March. Another new chapter began in winter 2003 with the construction of "Ice Globe Theatre" - a replica of Shakespeare's "Globe Theatre" on the Thames in London. The project attracted large numbers of guests to the region. The building was a highly interesting challenge in its own right, and the goal was to unite that bastion of the Thespian arts, The Globe, with the beauty and magic of Icehotel.

Sadly, the sun's rays begin to melt the newly built Icehotel in late April. Although the last guests check out at the end of April, work continues into June, by which time Icehotel has become water hotel. To get a head start on the following winter season, the builders insulate thousands of tons of ice in Icehotel Art Center - a freezer covering 1,500 square metres, where there is also an ice and snow exhibition designed to give visitors a taste of Icehotel.

Of Icehotel itself, the sculptors save just a few works of art from the preceding winter season in the Art Center, and the rest of the hotel is left to melt away. Nature's own short-term gift gives an opportunity to experiment with form, space, and technique every year; and just like snow flakes, no two Icehotels are ever identical. The beauty, and the parts we are not completely happy with, run back into the River Torne and make way for next winter's version of Icehotel. From this river, the ideas of the summer shall find expression in the creations of the coming winter.

From the river came the ice, and to the river it shall return; all that will remain are memories.

Icehotel is located 200 km north of the Arctic Circle in the village of Jukkasjarvi in Swedish Lapland. The entire hotel from floor to ceiling is created from frozen and clear water, that they have loaned from the Torne River. The Arctic light is present constantly: the Northern lights in the wintertime and the Midnight sun in the summertime. Quality of life is empowered by the wonders of Nature.Jukkasjarvi is located 12 km from Kiruna airport and 17 km from Kiruna train station.Mondays-Fridays there are local buses from Kiruna bus station, not on weekends.Transfer from Kiruna airport or tagstation can be booked through the reservations Department.

The Absolut Icebar in Icehotel probably enjoys more international fame than the trendiest bars in Stockholm. Twice mentioned in Newsweek as one of the most stunning bars in the world, it certainly leaves no-one cold. At night, the bar is a natural meeting place for all those who are taking the plunge and spending the night in Icehotel. Perhaps they feel the need for a little night-cap. They will encounter many nationalities in this truly cosmopolitan bar; Japanese tourists as well as visitors from The United States, Great Britain, Germany, Spain, France, Poland and even South Africa. Icehotel Restaurant offers a gastronomic journey with the help of Lapland's food, served in the inn. Icehotel Restaurant has won the Werner ögeli Statuette, and has been featured in gourmet magazines all round the world. On the menu, you will find several culinary masterpieces.

In Icehotel there are double rooms and suites for overnight guests, a lobby, a pillar hall, film auditorium and of course the famous Absolut Icebar - where folk from all over the world socialize till late. Guests inevitably have a few queries before tucking themselves in their sleeping-bags in one of the stylish ice suites. Guide in Icehotel will be happy to explain everything you need to know about sleeping in the Icehotel. You will be supplied with a specially made sleeping bag complete with a sleeping bag liner. In the morning a hot drink will be brought to you, after which you can enjoy an early morning sauna followed by breakfast. The temperature in the Icehotel varies between -4 and -9 degrees centigrade, depending on the temperature outside.

Double room You sleep in a thermal sleeping bag on a special bed built of snow and ice, on reindeer skins. You are awakened in the morning with a cup of hot lingonberry juice at Your bedside.

Family room You sleep in thermal sleeping bags on a special bed built of snow and ice, on reindeer skins. The bed is wide enough for at lest 4 persons. You are awakened in the morning with a cup of hot lingonberry juice at Your bedside.

Suite Unique rooms decorated with ice art and sculptures. You sleep in a thermal sleeping bag on a special bed of snow and ice, on reindeer skins. You are awakened in the morning with a cup of hot lingonberry juice at Your bedside.

ICEHOTEL Deluxe Suite This is something extra in terms of decoration and service. For that very special occasion, or just because You are worth it! Unique rooms decorated with ice art and sculptures. You sleep in a thermal sleeping bag on a special bed of snow and ice, on reindeer skins. You are awakened in the morning with a cup of hot lingonberry juice at Your bedside.

There are 30 fully modern cabins next to Icehotel, and also close to the reception, Art Center, Jukkasjarvi Wardshus and the conference center. Some are four-bedded cabins with two separate bedrooms, a bathroom, kitchenette and sittingroom, TV and telephone.:

Accommodation Chalet The chalet has two separate bedrooms and 4 beds in total, bunk-bed arrangement. There is a sitting room with kitchenette, TV and telephone, bathroom with shower and toilet.

Aurora house The aurora house has two separate bedrooms for 3 persons, meaning a single bed and a double bed. The rooms have a ceiling skylight for a view of Midnight Sun or Aurora borealis. There is a sitting room with refrigerator, water boiler, TV & telephone, bathroom with shower and toilet.