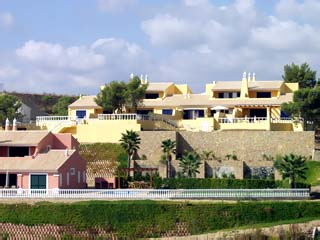 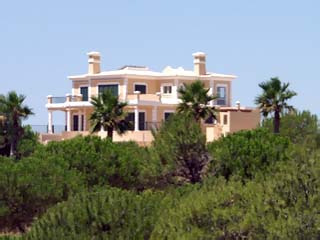 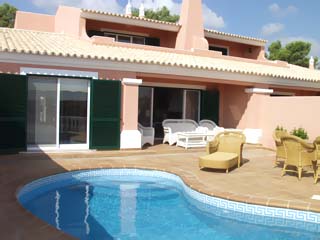 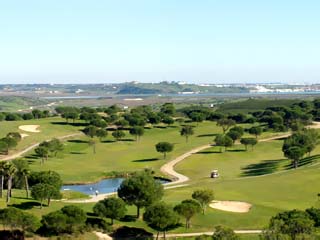 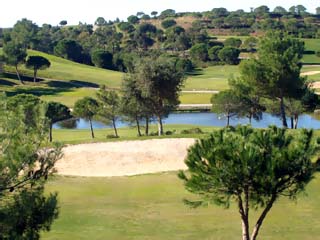 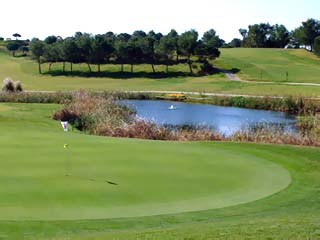 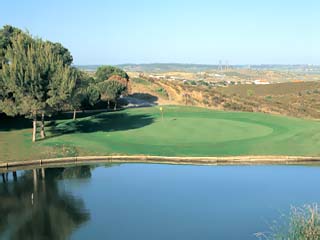 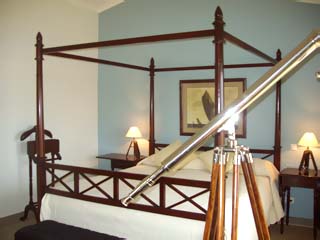 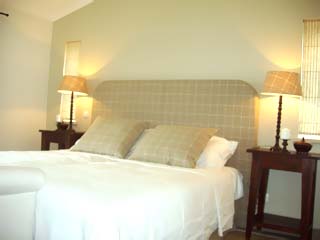 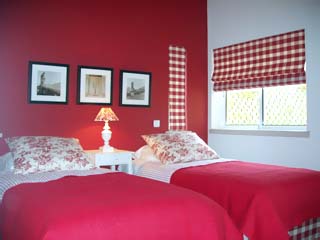 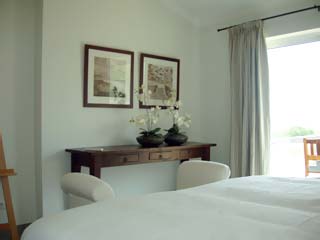 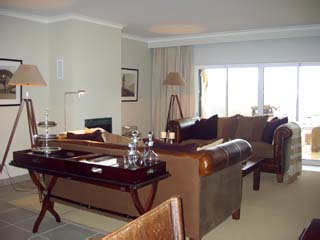 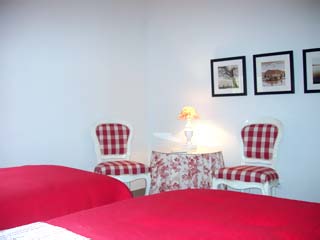 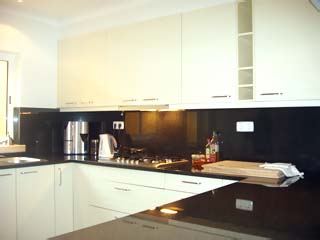 On the road going from Algarve to Spain, just before crossing the Guadiana River, on the right, a rather imposing ensemble of ruined fortifications sets itself against the horizon line, dominating a flat area of swamps down to the mouth of the river. These are the remaining of the last bunker of the Templars, where thet came to rest, under another name, when the Order was extinct and they were prosecuted all over Europe and sometimes piously burned at the stakes by agents of Rome.

This, besides Castro Marim Golfe and Country Club and other reasons makes it worth a stop. Castro Marim is one of the oldest human settlements in the Algarve. Signs of neolitich, bronze and iron ages activity and vestiges of Phoenician presence were found in its grounds. Throughout Roman occupation, Castro Marim was an important outpost serving as interface for the different imperial networks - inland, fluvial that overseas (Mediterranean). The name Castro, from Latin Castrum, implies that some kind of fenced military infrastructure existed here. Marim has an obvious connection with mare (sea). At the time the castrum site corresponded to the mouth of the River. With the fall of the Roman Empire, Castro Marim lost its importance. The ensuing Visigothic Monarchy was strictly continental power centred in Toledo, with little interest in the southern fringes of the territory. This was its soft spot.

The lack of attention to the southern border was disastrous and brought to an end the Iberain Visigothic period. At the outset of the VIII century, two Arab armies under the command respectively of Tarik and Musa, invaded the Peninsula through Gibraltar,named after Tarik and conquered the near totality of the Iberian Peninsula. When the war spoils were distributed among the winners, Algarve, Castro Marim included, was partitioned among Arab chieftains who remained tributaries of the Wali of Andaluzia.

The Christian re-conquest of the Iberian Peninsula was a strenuous task that took almost eight centuries to complete. However, by the mid 13th century what is today the Portuguese territory was fully liberated. Castro Marim return to Christendom in 1242, when knights of the Temple, under the command of Paio Peres Correia defeated the Mussulman forces stationed there.Portuguese king's, de facto but not de jure, sovereignty over Algarve was then established. The Castilian king objected, claiming that the territory was perviously a tributary of the Walli (Lord) of Andaluzia, whose realm he intended to conquer. However, at the time, the Castilian King was not in a position to validate its claim in the field. The border contention was settled by the treaty of Alcanises, signed fifty two years later, by Dinis of portugal and his cousin, Sancho II, of Castile. Dinis renounced to the township of Ayamonte. The Castilian monarchy, in turn, recognised the Portuguese sovereignty over the whole territory of Algarve West of Guadiana and the Portuguese conquests in Alentejo east of Guadiana.

Local tradition favours the legend that Castro Marim fortress was built by the mussulmans. Such popular version is not substantiated by the archaeological research in process. Throughout the mussulmanic period, local population, although significant in size, was scattered along the Guadiana banks, living in small communities. There is evidence that the population was decreasing in large numbers towards the end of the period.

The works of the Castle began by order of the Portuguese King Afonso III (1246 - 1279). Castro Marim was destined to be a military outpost against mussulmans, still controlling Andaluzia and also a dissuasor of the then frequent raids of Argelian pirates, but the Portuguese Kings never gave up the idea of setting up people in this part of the kingdom. In 1277, Afonso III granted special privileges to the local inhabitants which were latter confirmed and enlarged by Dinis (1279 - 1325), Joao I (1383 - 1433), Joao II (1481 - 1495) and Manuel (1495 - 1521).

The outer castle, castelo de Fora, was built in order to offset in trategic terms the loss of Ayamonte, after the treaty concluded by King Dinis. Now potential aggressor was the well disciplined Castilian cavalry and no longer the mussulman's chaotic algazzara.

At the time the King was faced with a dilema: the Pope had requested him, as all the other Christian Kings, to close the Order of the Temple extinct by a papal edict of 1321. But King Dinis had high regard for the military services rendered to him by the Templars and was also aware  of the wealth which the order had brought and created in the country. So he decided to rename the order. The Templars became the Order of Christ and their headquarters were set up at remote Castro Marim. For this purpose the King donated the fortress and the adjoining territory to the monk-knights. The Mestrado of the Order remained there until 1356, when a papal sanction allowed it to return to the famous Convent of Christ, at Tomar, in central Portugal, where it remain until 1834. Then, it was dissolved by a drecree of the liberal Goverment of the day.

The most renowned of the Grao - Mestres  of the Order of Christ, was Henry, the Navigator (1394 - 1460), whose mother, Philipa of Lancaster, was a daughter of John Gaunt. Until 1513, the Order had great influence on the Portuguese public life. Its contribution in the form of geographic knowledge accumulated and financial resources mobilised for the maritime discoveries of the XIV and XV century is now well established. Besides it serve as a cradle for the military elite who conducted the destinies of the nation through the period. The Order of Cristo remained faithful to the Temple's tradition of extending protection to the Jewsh population. Tomar and Leiria, two domains of the Order, became , during the period, flourishing Jewish trading centres.

In 1504, King Manuel, still followed the previous policy, caused improvements of a military nature to be made on the Castle of Castro Marim, enabling it to serve as a logistic basis for the maritime supply line supporting the Portuguese held citadels in the Moroccan Northern coast. However the days of glory of the Order were numbered. Nine years later, the King, motivated by love for a beautiful Castilian infante, took the decision to comply with Isabel, the Catholic. This proved disastrous for the previous establishment. The Monk-knights of Templars-Christ came under suspicion and were gradually relegated to marginal positions. The Jeronimos, first, and the Jesuits, later, took over the power behind the throne. As result, Portuguese society lost its military nerve and simultaneously its commercial and financial vitality faded.

The ruins reople can visit at Castro Marim, more than witnessing of the eventual redundancy of military fortifications, represent the vestiges of a social organisation under which a nation acquired great vigour, and that came to an end, at the outset of the Modern Age, by a capricious decision of an infatuated king.

At Castro Marim Golfe and Country Club one can enjoy breathtaking views of the ruined fortification. As you can read from the above Castro Marim played a very important rule in the Portuguese history.

The Luxury Complex of Castro Marim Golf and Country Club comprises a total area of over 210 hectares located only 5km from the Spanish border. The short drives from Faro or Seville International airports along the connecting motorways mean that Castro Marim is within easy reach of two interesting and above all enjoyable cultures, whilst avoiding all the noise and pollution associated with air traffic.

Apart from the Beach Club and the Golf Club Restaurant there are several other restaurants and bars within and around the development, all of which will be of the highest quality.

Luxury three-bedroom Linked Villas are available including a Terrace and Plunge Pool. Extra attention has been given to the Kitchens and quality Bathrooms and to create living areas that provide all home comforts whilst adding that little extra to make your time with us very special.

All villas are clustered in various locations, taking advantage of the best available views, sun position and golf course access.

With the construction team on site the whole year round, the hotel is in a position to offer you the best possible service at realistic prices.

Construction times will be fast and reliable, and you can be safe in the knowledge that only the best materials will be used. The hotel will be capable of organising every detail for you, and once again you will be free to choose how much or how little you would like to have done - the amount of work is entirely up to you!