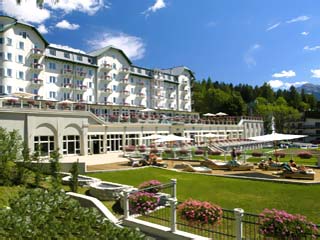 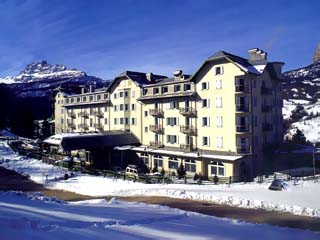 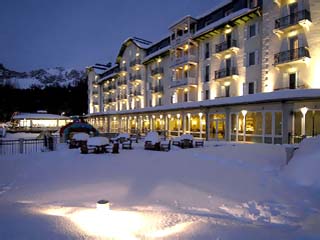 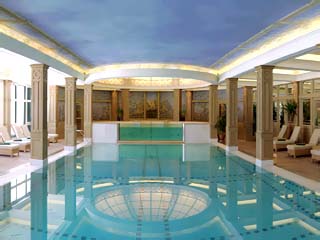 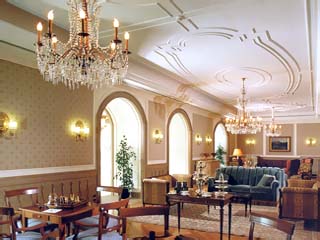 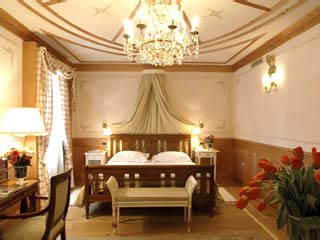 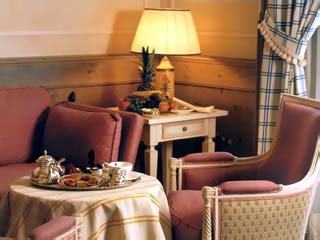 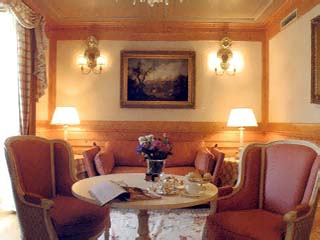 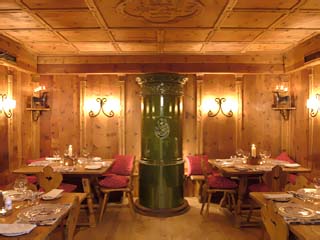 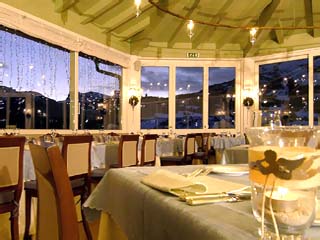 The Cristallo was built by Giuseppe Menardi, a member of one of the oldest families in the valley, one century ago, in 1901. The Menardi family built a private road, which still bears its name, up to the Hotel from the centre of Cortina, at the foot of Mount Faloria. Renowned guests of the historical Hotel Cristallo have included no less than the great Russian writer Leone Tolstoj, who came with his family in 1906, and later on Gabriele D’Annunzio, who left a written trace of his visit, a few lines dedicated to Rosa Menardi.

At 1920, a time when travel was the preserve of a privileged few in the European aristocracy, the Cristallo became the site of international society occasions. Cortina d’Ampezzo had already become the most exclusive and best-known holiday Resort in the Dolomites. Before the Great War, when it was requisitioned as a military hospital with the code name 0.40, the original core of the Cristallo was expanded with the addition of another building, making it the grandest hotel complex of its day. Elegance, style, passion, savoir vivre: the great tradition of hospitality is renewed every year.

The 1956 with the Olympics, the cinema, la dolce vita was a golden age. Cortina was at the centre of great events in society, culture and show business, and the Cristallo became an important landmark for the big names. Its style was unmistakable; its love of great occasions, its taste for haute cuisine, its exclusive personal service and the certainty of being among friends.

In the ’60s Frank Sinatra stayed at the Hotel while filming Von Ryan Express in Cortina and Calalzo. The great party and the pie-in-the-face incident were talked about for years: at a grand reception held to celebrate the end of the filming, a hundred or so pies were served, only to be thrown at one another by diners in high spirits. King Faruck of Egypt was there, and Nobel prize winner Saul Bellow. Another much-loved film, The pink panther with Peter Sellers, was also filmed at the Cristallo, which was the elite set for films such as Il conte Max starring Vittorio De Sica and Alberto Sordi. The great pianist Arthur Rubinstein stayed at the Palace Cristallo. He played the piano in the great ballroom – but only when the doors were closed. No-one was allowed to disturb him!

The Hotel belonged to descendants of the Menardi family until 1978, when it was sold to Compagnia Italiana Grandi Hotels. Times had changed, operating costs had grown exponentially, and guests had different tastes. Ciga operated the hotel until 1992, when it was closed. Until an entrepreneur from Bologna decided to embark on the adventure of renovating and reopening a chapter of history. His intention was to bring back the Cristallo of old times, frequented by actors and princes, by magnates of industry and famous singers – with something more. He came to an agreement with two top calibre partners, Isokinetic and Transvital, on a grandiose project for restoration and expansion of the hotel. Alongside its luxurious halls, elegantly furnished and decorated rooms, and multitude of top quality services, the Hotel offers a series of new services to make sure that it is full at least eleven months of the year.

The project was assigned to Spatium of Milan, entrusted with analysing the old structure and coming up with a stylistic concept. The result was an extraordinary idea. On the ground floor, the axis of the building crosses the great reception hall and elevator lobby to a 70m² lounge and a double stairwell leading from the veranda down to the reception area of the wellness centre, leaving free passage out onto the patio and from there to the gardens. The veranda was redesigned to achieve the greatest possible transparency. The north-western corner was given an octagonal shape repeating the form of the tower on the corner of the building. Verandas, pergolas, and greenhouses perfectly suit the great palace’s image and allow it to rest lightly on the ground, giving structure to its patios like the big European Kurhäusers. At the northern end of level –2 is a swimming pool measuring 10x20 m, plus a semi-circular Jacuzzi with a 4 metre radius. The entire floor overlooks a deep patio, and the pool continues into a large open-air solarium. Returning to the route from entrance to the hotel, a large roof offers ample sheltered space for welcoming guests. The natural rough stone flooring on the inside, with its rough-cut finish, and outside, with a hewn finish, emphasises continuity.

The decorations characterising the building as a whole are all introduced in the entrance hall: the inlaid, perforated wooden skirting boards such as those found on balconies and loggias in the architecture of the Alps, as well as painted wood, wooden flooring, and ceilings decorated with plastic elements and paintings. The furnishings have an Alpine feel, filtered by the influence of Gustavian taste. The Nordic neo-classicism that is the basis for this style developed during the reign of Gustav III of Sweden (1771-1792), a literary man and founder of the Academy of the Arts. The French culture which the king so admired blended with the Nordic decorative tradition to form a classical decorative style with a peaceful feel, dominated by airy, delicate pastel shades: grey, light blue, pale green. Thus we find brushed wood floors bleached with lime to a silvery grey shade. Walls are divided into panels with fabric inserts, carved frames, stencilled paintings, pilaster strips and skirting boards, both real and trompe l’oëil.

In each space, atmosphere is created by harmonisation of these elements and characterised by a pastel colour on each floor, in addition to white. Items found on the antiques market or ordered from makers of quality replicas furnish the hall, veranda, restaurant and lounge, the elevator foyers on each floor and the Bedrooms.

Cristallo Palace Hotel   Spa is located in Cortina d'Ampezzo which is found on the north of the Veneto region, in the Belluno areas, only 44 km from the Austrian border. The Hotel is situated 162 km from Venice, 432 km from Milan, 692 km from Rome, 156 km from Innsbruck-Austria and 293 km from Munich- Germany.

Great scenography makes every lunch or dinner appointment an unforgettable experience. The Restaurant and Bar is located on a 90 metre veranda overlooking the Ampezzo valley. Its cuisine is distinguished by a sophisticated elegant combination of international dishes coupled with the traditional flavours of the local gastronomic tradition. The grand breakfast buffets are particularly rich.

Next to the restaurant, La Veranda, a new dining space, will be created with furniture which smoothly blend with hotel interiors. The Veranda of Cristallo, with its gazebo structure surrounded by windows, will let you enjoy the magnificent view of Tofane Mountains. A real place for flavour, where you can eat or meet tasting a precious wine or champagne. The highest quality brands of wine are selected by own sommeliers in the wine Bar and in the champagnerie.

Cortina d’Ampezzo is rediscovering its history and its golden age with a great comeback. The Hotel Cristallo reopened the world-famous Monkey Club, a nightspot that made history in the 60s and 70s, when Cortina was a meeting place for the international jet set.

All the Cristallo Hotel's 73 Rooms and Suites are furnished in gustavian style, enriched with precious hand-painted boiserie and refined frescoes hand-made by expert artigiani.