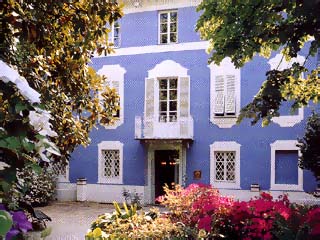 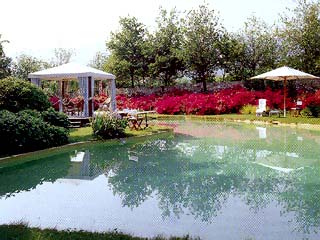 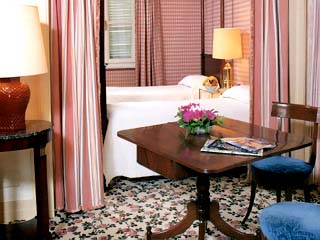 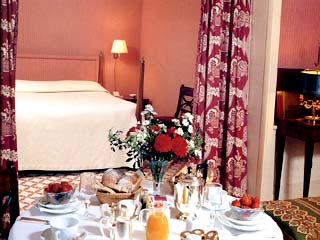 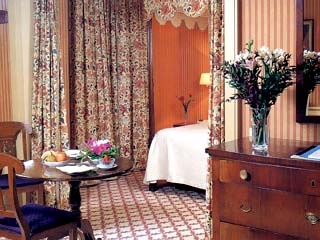 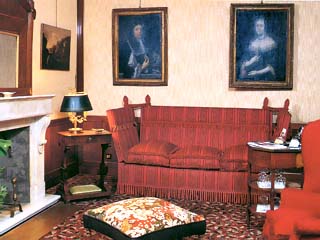 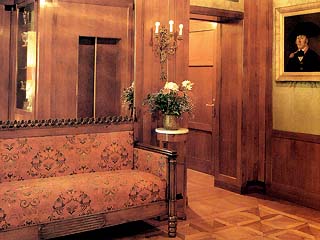 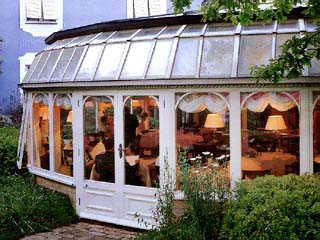 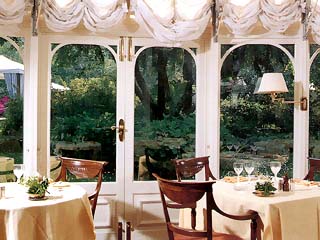 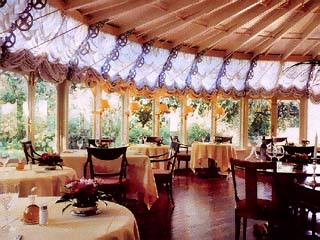 The Hotel Locanda l'Elisa, a pretty deep lavender villa stands at the foot of a range of hills close to Lucca.

In the sitting area of Elisa it is possible to relax in front of the white-marble fireplace with a drink or a book. We also invite you to leave a comment in our Guest book to remind us of your stay in our hotel.

The Restaurant is situated in a Victorian style conservatory surrounded by a luxuriant garden of bushes, flowers and aquatic plants, crossed by a burbling brook and a large swimming pool.

A Villa that was rebuilt in the early eighteenth century by a Napoleonic official who arrived in Lucca in the retinue of Elisa Baciocchi, Duchess of the town and sister of Napoleon III. The quiet and charming Villa became an elegant hotel in 1992.

In fact, traces of works affected at the time can be found in the residual colours found under the plastering and in decorative elements still to be found in some rooms. In the conversion to a hotel, though I would prefer to say house, account was taken of this precedent decoration, creating 10 suites and the salons with eighteenth century furniture, fabrics and carpets designed and based on illustrations from the period, the doors and woodwork taken from the motif found on site.

From Locando l’Elisa it is easy to visit the historical, natural and artistic patrimony of Tuscany:

For the Dining Room, the semi-oval conservatory of English origin (Victorian) has been used. This helps create a perfect, intimate atmosphere in which to taste our excellent meals surrounded by the luxuriant garden of the villa. Guests can have Lunch or Dinner in our charming Restaurant where they will find a refined service, high standard cuisine (typical dishes in the local tradition combined with more recent ones) and an excellent wine list.

The area around the villa has been transformed into a flourishing garden full of bushes, flowers and trees. The garden is considered a sort of botanic garden, to be visited any time of the year, thanks to its rich colourful vegetation (more than 100 plants). The garden is crossed by a babbling brook.

An irregular, shaped Swimming Pool fits perfectly into the scenery. Our Guests can relax, read a book or drink an aperitif in the small wooden gazebo by the Pool.

The Locanda l'ELisa is composed of 8 Junior Suites, plus one Double and one Single Room. Furniture of the 1800's, fine antiques and paintings, draperies and walls covered in damask fabrics create an elegant residence. Some of the Suites have a four poster bed and all the Rooms are equipped with all comforts: Air-conditioning/Heating system, IDD Telephones, Sat TV, Modem access, Radio, Safe Box with personal code, Mini Bar, Hairdryer.

The Rooms are soundproof and high quality technical equipment means that the villa is perfectly Air-conditioned.