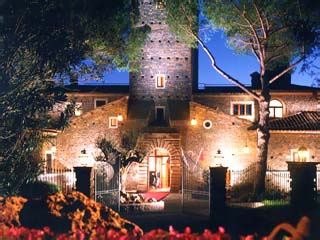 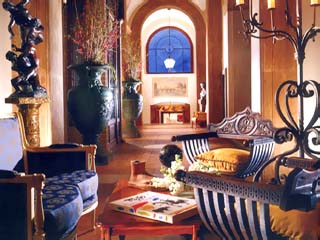 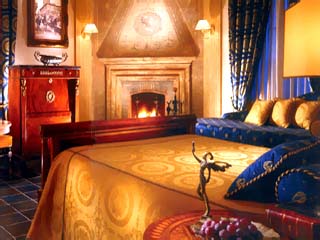 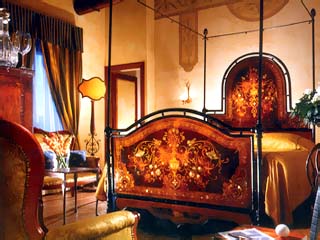 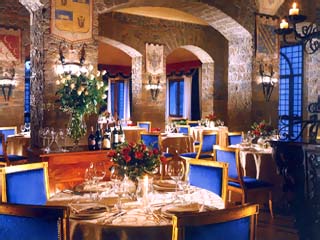 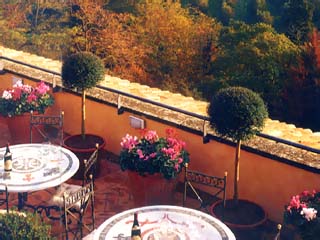 Ever wanted to stay in a castle? Now is your chance. Spend some time at the Castle Hotel Castello della Castelluccia, one of the most intriguing and enigmatic castles to be found in the whole of Italy. Now a deluxe four star the Hotel, the Castle has had an illustrious and often mysterious past.

In Roman Times the castle rose from the remains of an ancient Roman Villa. Built between the 12th and 13th centuries by the noble family Cancellieri, who were themselves derived from the Orisini family. Midway through the 13th century, the castle passed to the Muti family.

Towards the end of the 14th century, the castle was ceded to the Cenci family, whose family residents included the famous intellectual of the period, Alessio Cenci. In 1420, the castle passed to the Del Bufalo and Cancellieri families.

At the start of the 16th century, La Castelluccia once more became the property of the Orsini family, but only for approximately, 20 years, when it was returned to the Cancellieri family. The Muti family took over the castle in 1590. Towards the end of the 16th century, the castle belonged to the noble family Azzolino, after initiating housing projects for their tenants, coined the phrase - borgus novus.

In 1660, the castle grew and subsequently was divided between two noble families Angelo Celsi and Antonina Celsi. Towards the end of the 17th century, the castle in its entirety, was bought by the Roman family Dei Giustiniani.

At the beginning of the 18th century, the castle became the property of Count Mantemarte who, to ease gambling debts, tried to sell it, unsuccessfully, to the Countess Rospigliosi. In 1704, the authorities confiscated and ceded the castle to Prince Livio Odescalchi in settlement of an unpaid debt. In the second half of the 18th century Prince Odelaschi ceded to the castle to the Azzolini family.

In 1852, La Castelluccia was acquired by Prince Boncompagni one of the most famous nobleman in recent Roman history.

In the 19th century, the castle then became home to the legendary tenor Francesco Marconi.

Tales of haunted castles in Italy abound, although, the truth be said many are without foundation or credible evidence to support them… at the Hotel Castello della Castelluccia and surrounding area not one, but three ghosts, are said to reside.

Cristina of Sweden and the Alchemist: Cristina of Sweden came to Rome in 1655 for a summer holiday. She was deeply religious and came to Rome to consecrate her faith in the Roman Catholic Church. She also came for another "secret" reason… Cristina had a secret passion - alchemy - which in those days was scorned upon and in many countries incurred the penalty of an excruciating death for all those who practised it… her love of magic and supernatural phenomena however, could not be swayed. One day just as dusk was falling Cristina was walking in the woods near the Castelluccia. All of a sudden she saw a bright light, which flared up, almost as if from directly inside the Tower of the Castle Castelluccia. Her curiosity aroused she decided to investigate the mysterious light and approached the tower. Unknown to Cristina, in the tower lived a famous alchemist called Tiraboschi, who, for some time had been experimenting with different formulas to turn everything into gold. Tiraboschi upon meeting Cristina was delighted to find someone who shared his passion and immediately begun showing her his chemistry kit. Tiraboschi was terribly excited and felt he was close to succeeding in his goal to make all things gold. He explained to Cristina that the flash that she had seen was a chemical reaction between two flammable substances which would provide the catalyst for his experiment to work. He invited to Cristina to have a closer look and in her excitement she slipped down the stairs and fell. As she fell her gold necklace slipped off and landed in the pot. Embarrassed and afraid of having ruined the experiment she made her excuses and left without telling Tiraboschi what had happened. Not soon after she left Tiraboschi found the gold necklace inside his pot and was convinced his potion had worked. Delirious with excitement he began celebrating and drinking quite a lot of the local wine. Intoxicated and boastful he began challenging the almighty himself. Tiraboschi claimed he was more powerful than God and began boasting that perhaps he indeed was better than god seeing as even the lord himself could not turn things gold. That same evening a bolt of lightning struck the Tower killing Tiraboschi instantly and seriously damaging the tower.

Things that go Clip Clop in the Night: For a couple of centuries some of the finest horses in Italy were bred in the grounds of the Castle Castelluccia. Unfortunately due to a gambling debt, the Count Rimbambito was forced to sell the stables and the horses were removed to a foreign land. Unfortunately, whilst abroad the horses could not acclimatise to foreign shores and within a matter of months every last one of them perished forever. Upon hearing the news of the death of his beloved horses, the Count Rimbambito was devastated. He resorted to alcohol to seek solace and in his inebriated state was convinced he could hear the horses. At first the servants and locals assumed he was simply delirious from the drink and distraught at his loss, but slowly the noises got louder and more people began to hear them. A few years later the Count died a broken man, however, the noises continued. Legend has it that the horses spirits returned to the place they loved and at night they roam the grounds of the Castelluccia, just as they did all that time ago. Quite a few years ago some rationalists tried to explain the legend by claiming that the clip clop of the horses hooves was simply the water from the stream running over the rocks. To prove their point they dredged the stream and made it devoid of rocks… the noises continue to this day.

The Tomb of Nero: In 1804, Napoleon Bonaparte was crowned King of Italy. To celebrate the occasion Pope Pius the 7th decided to organise a series of parties and special events to commemorate the event. One of these special events was a fantastic plan of floating and flying a giant airborne balloon filled with different coloured luminous glass elements. The idea was to fly the balloon from Castelluccia to the Lake of Bracciano, however, the balloon never got that far. Shortly after take off the balloon crash landed directly on top of the Tomb of the infamous and fearsome former Roman Emperor Nero. Today you can still see signs of the impact of the balloon upon the Tomb. The locals upon seeing the flash and multi-coloured ball were convinced a UFO had landed and rushed to the spot. For weeks peasants, villagers and souvenir hunters plagued the area looking for bits of the wreckage of the balloon's ill fated maiden voyage. Legend has it that Nero was livid at, first of all, the balloon and then all those pesky people disturbed his sleep. It is said that the commotion caused by the impact and its aftermath, rose him from his sleep and made him leave his tomb. For the last two centuries many people have sworn that they have seen him roaming the fields and woods of the Castelluccia looking, unsuccessfully, for a place to sleep… well if he is still looking he need not worry as the Hotel Castello della Castelluccia is open and ready for business.

The Castle Castelluccia has always belonged to a rich noble Italian family of one sort of another. For over 7 centuries the upper classes have wined and dined at this exclusive picturesque residence. Horse riding, Fox hunting, state banquets and regal occasions were all part of the castles illustrious past. Now, delve into the history of the Castelluccia and make your next trip to Rome a memorable one.

The Hotel Castello della Castelluccia is located in the middle of the Lazio countryside. Surrounded by rolling woodlands and impeccably maintained grounds, the countryside is the perfect refuge from the pollution of the city and the stress of the workplace. The location of the Castle Castelluccia in the north of Rome is ideal for those arriving or wishing to go to Florence or Viterbo. Additionally, the GRA or ring road of Rome is very accessible, which renders reaching motorways much easier. The centre of Rome is only 45 minutes away. There are no buses going directly to the Hotel, therefore you have to take a taxi or hire a car. At the time of writing the Hotel is in the process of organising a shuttle service.

The Hotel Castello della Castelluccia offers its Guests a magnificent Gourmet Restaurant as well as a selection of Wines from its Wine Cellars.

Outdoor Activities: Immersed in beautiful countryside the Hotel Castello della Castelluccia offers the best of outdoor activities to suit all tastes. Among the activities on offer are horse riding, cycling, walking and golf.

Weddings: The Hotel Castello della Castelluccia is the ideal place for an unforgettable wedding in Rome. The Bridal Suites in the medieval Tower, a sophisticated Reception by the pool in the Summertime and lavish banquets, either in the main Hall or in the castle courtyard. Many of Rome's most prominent families have chosen the Castelluccia as the place for their daughter's wedding celebration. At the Castelluccia they know how important the big day is and ensure that meticulous planning and preparation to  ensure that everything regarding your wedding in Rome, runs smoothly. For the Bride arriving at the castle gates in a horse-drawn carriage followed by a banquet that would grace any princess is surely one of the most memorable weddings one could possibly have.

In a castle no two Rooms are alike. Superior Rooms are located in the main building, while the Suites are situated in the Medieval Tower. The Bridal Suites in the medieval tower contain fantastic views of the surrounding countryside and have been completely refurbished and renovated in the spring of 2002.

Its 24 luxurious Rooms, Cottages and Tower Suites are equipped with:

Deluxe Double Room for Single Use