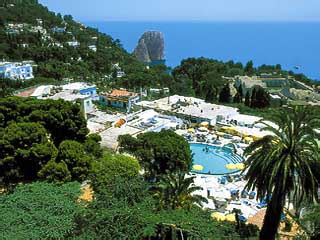 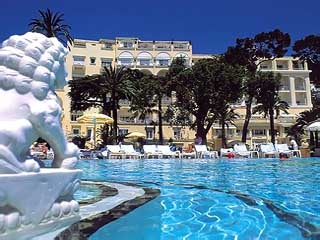 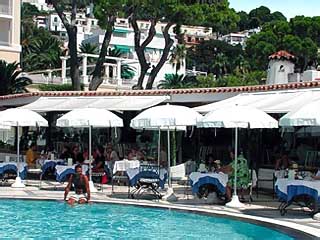 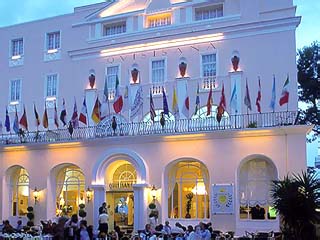 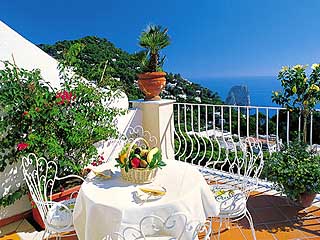 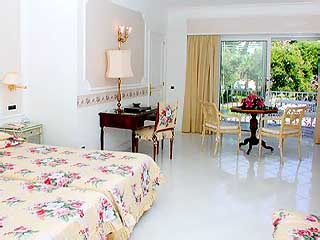 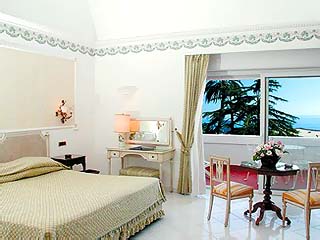 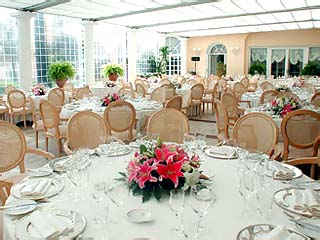 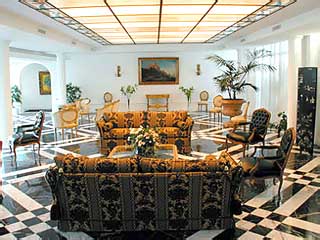 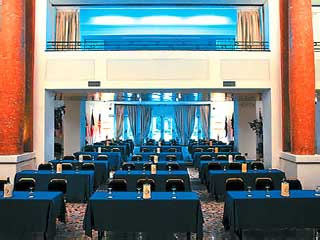 From 1845, onwards the Grand Hotel Quisisana has been receiving all its guests in an atmosphere of exclusive elegance and in the great Hotel tradition. A luxury Hotel, whose conception of hospitality has become a real trend in Capri and all over the world. Through the years, the Morgano family has been able to conceive and create a typical Italian style Hotel by giving their interpretation of Mediterranean art and the corresponding way of living.

Behind the City-like facade of the Hotel lies a truly Deluxe Resort Hotel with Dining, accommodation and sports facilities that surely rank among the finest in Italy. The ambiance is relaxing, the decor stylish, with marble floors, chandeliers and white couches in the Public Rooms leading to charming manicured gardens accented with cypress, pine and palm trees.

The Quisisana is now a symbol of Capri, nearly as much as the Blue Grotto. Sovereigns, actors, writers, industrialists and jet setters are its inhabitants. These have included Sidney Sheldon, Claudette Colbert, Tom Cruise, John Belushi, Duran Duran, the Agnellis, George Ford, Giancarlo Menotti, Jose Carreras, Cindy Crawford, Linda Evangelista, Mariah Carey and many others. And in the past Ernest Hemingway, Jean Paul Sartre and the Savoy Family. Since 1985, the Quisisana has been a full member of The Leading Hotels of the World. The goal is to have a Hotel with a high reputation, always maintaining high levels and keeping in mind that it is difficult to go up, very hard to hold the level, easy to fall down and absolutely impossible to rise again.

Around the first half of the 19th century, a Scottish doctor, George Sidney Clark landed in Capri and being convinced that the mild Mediterranean climate was ideal for good health, built a clinic in the sunniest spot, naming it Quisisana, which means "Where you will restore yourself to health". Over the years that followed, many tourists visited the Island and Dr. Clark gave up medicine, dressed as a concierge and opened a pension and then a small hotel, where it was possible to lodge for only eight lire. After Dr. Clark's death, his wife and children ran the place, but later sold Quisisana to their ambitious butler Federico Serena, who later became Mayor of the Island of Capri. The Hotel was enlarged and in the process bones of elephants of the quaternary age were found. These may now be seen in the Cerio Museum. They are proof of primitive life and connection of Capri with the mainland. From this period on, more and more people visited Capri. Among the aristocratic group was the German magnate Friedrich Krupp. In order for Krupp to reach Quisisana easier from his boat anchored at Marina Piccola, he commissioned his engineer to build, what became the famous, spectacular Via Krupp. Serena died in 1913, his wife and sons then ran the Hotel, but they sold it in 1918, to S.I.A. a society with no Capri born members. In the fifties, a Mexican financier, Felix Mechoulam, acquired the Quisisana. Many improvements in the public areas and guest accommodation were made under his ownership. The Hotel, thus enlarged, gained a high reputation. After twenty years of Mechoulam’s ownership, Max Grundig, the German electronics tycoon, fell in love with Capri. He took over the Quisisana.

Love is never eternal and at the beginning of 1982, a local family of Capri hoteliers named Morgano took possession of the Quisisana. We Morganos love our work and we have engaged all our power and hotel experience, so that now the Quisisana is a prestigious Five Star Deluxe Hotel. It is a goal my grandfather Giuseppe had in mind to surpass and exceed his eternal and political rival, Federico Serena. At first, my grandfather built a hotel on a higher location, to have his competitor under his feet, not satisfied with that he would spit, not politely, in the direction of Serena.

I guess that if Serena were aware that the Quisisana is now property of his enemy's grandson, he would turn in his grave.

Capri Island - by Hydrofoil from Naples, Sorrento or, during the peak summer months, Positano. On arrival at Capri Harbour Guests are met and transported by taxi up the hill to the Piazza Umberto, from which it takes approximately 3 minutes to walk to the Hotel.

Transportation: Capri Town is all pedestrian, so you will have to walk to your Hotel either from the last stop of the funicular or from the taxi stand. If you have any luggage remember that, all the Hotels offer and charge for a Transport Service from the Port. Ask the Hotel representatives at the Port and they will look after your luggage and send it to your Hotel. Before bringing your car to Capri, it is better to contact the shipping company, as there are many restrictions. Helicopter Service to/from Naples Airport - on request and Limousine Service to/from Rome or Naples Airports - on request.

The Bars and Restaurants of the Hotel invite you into beautifully lit and elegantly decorated Rooms where you can spend many pleasant moments in an enchanting atmosphere. Lunch can be enjoyed in the casual ambience of the Poolside Colombaia Grill Restaurant. Dinner is served in the elegant atmosphere of the Quisi Gourmet Restaurant. In the evening you can enjoy your favorite drink on the fashionable Quisi Bar Terrace.

The Qvisi Bar is an English style Bar where you can enjoy your favourite drink, with Live Music every evening from 18:00 until 0 2:00. The Terrace Bar on the Terrace of the Hotel is the meeting point for many celebrities, invites you for an aperitif or an after dinner drink. The Wine Bar Intermezzo offers an extensive and diverse menu with a wide array of salads and cold dishes combined with excellent selection of wines available by the glass. Open 11:00 - 17:30. Happy Hours : from 17:30 to 19:00 you can take the opportunity to enjoy your favourite drinks at a very special price in the Qvisi Bar or the Terrace Bar. The Qvisi Gourmet Restaurant welcomes you for a Candlelight Dinner of light Mediterranean cuisine in elegant surroundings. Open from 19:30 - 22:30. From mid-May to the end of September it is open from 20:00 - 23:00. Sunday, closed: from mid June to mid September. The La Colombaia Restaurant, adjacent to the Pool, invites you to a regional meal consisting of a Buffet Lunch or Neapolitan Pizza cooked in a traditional wood oven. Open from 12:00 - 15:00. From mid-June to the end of September it is also open during the evening.

The extensive use of locally produced tiles ensures a definite local feel.

Junior Suite Rooms with sitting area on park and pool side