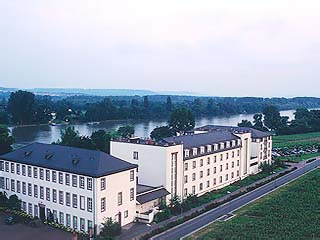 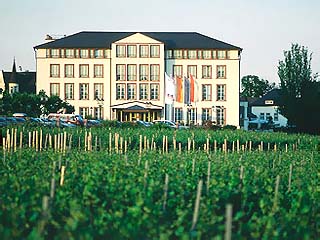 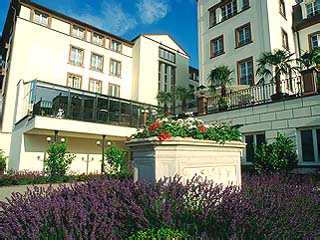 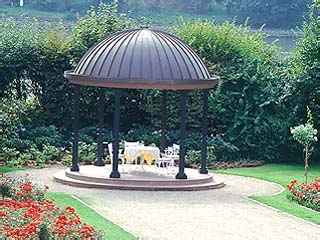 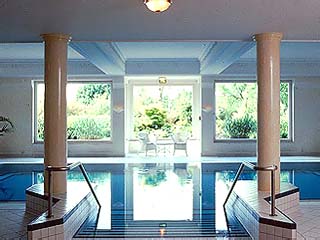 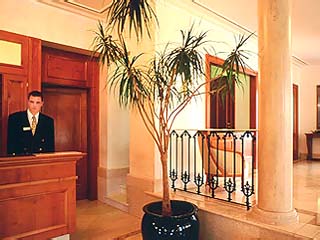 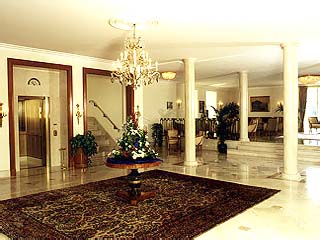 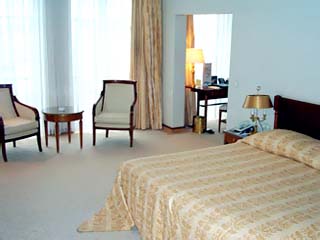 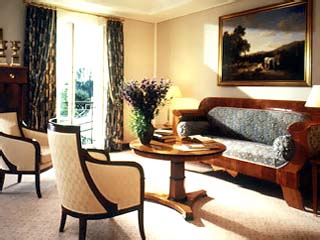 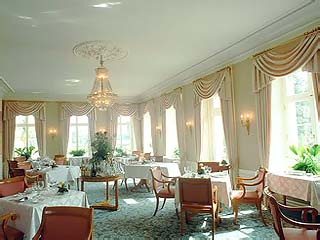 Luxurious living is one of the finer things in life. Whatever you choose, be it guest room, suite or apartment, each has its own magnificent view across the palace park, the River Rhine and  vineyards.

Leisure, rest and relaxation. Only when you feel at home, can you really relax and enjoy yourself. The splendour of days gone by is carefully preserved, while all the conveniences of modern life discreetly look after your comfort and well-being.

On the site of today´s chateau the Knights of Erbach had their residence from 1189 to 1275. For four centuries thereafter the estate belonged to the Knights of Allendorf, who passed it on to the family of Langwert von Simmern.

In 1801 the Earl of Westphalia pulled down the ancient buildings and began with the construction of the chateau, as it is found today.

In 1855 Princess Marianne of Prussia, born of Holland, daughter of the King Wilhelm I of the Netherlands, bought the estate. Princess Marianne married Prince Albrecht of Prussia, brother of the later Wilhelm I an son of the King of Prussia Friedrich Wilhelm III. The couple separated before the chateau was bought; due to the multiple affairs Prince Albrecht had. Finally Marianne asked for divorce. The Princess was greatly interested in art and collected a great number of works. Paintings she liked, but which were not up for sale, she had copied. Because of here lave for art, she enlarged the chateau by building an art gallery. Today the collection which is bound to the chateau an can not be sold separately has over 200 paintings.

In 1861, after the death of here son Johannes, the Princess signed a document in which she donated 60.000 florins and an adequate property to build a church, Johannes was buried under the altar. The Johannes church is today´s Protestant church of Erbach.

In 1902 the island in the river Rhine was renamed to “Mariannenaue”.

Until 1987 the family Prussia was owner of the estate.

In 1987 the estate was bought by the Leibbrand family. All buildings were restored and partly enlarged. Willy Leibbrand turned the old fashioned style estate into a marvellous 5*****  hotel.

Since 1999 the Hotel Schloss Reinhartshausen belongs to the Small Leading Hotels of the World.

In 2000 the estate Reinhartshausen celebrated its own 200 years anniversary.

Since November 2001 there is an operative alliance between Hotel Schloss Reinhartshausen an the Kempinski AG.

Convenience is a must. Easy to reach: in the centre of the Rhine-Main area in the heart of Germany. Close to the cities of Frankfurt, Mainz and Wiesbaden, a unique experience awaits you.

You will find the Restaurant Marcobrunn within the historic palace. Awarded stars in the Michelin Guide, the restaurant offers culinary delights of the highest standard. Chantal & Alfred Friedrich are looking forward to welcoming you.

If the weather is fine, dine Al Fresco on the Palace Terrace and discover the delicious wines.A gourmet paradise.The atmospherie cellar awaits you with specialities of the Rheingau area.

Luxurious surroundings. Relaxation. Communication. The moment when the last light of day blends with the gleam of candlelight. The start of a merry and stimulating evening, to meet with business associates or just to relax at the end of a busy day. Join  in  Wintergarden-Bar.

Luxurious living enhances the quality of life. It is the hotel's aim to fulfil this principle. You can choose from 63 elegantly furnished rooms and  generous suites, some with whirlpool and fireplace. All have wonderful views over the castle park, Rhine or the vineyards and feature lovingly selected antiques. Modern amenities such as ISDN-connection, safe and trouser press are just some of the services provided. The hotel 's service is designed to cater to the hotel 's guest’s wishes. The hotel has a range of room options available offering you a wide choice. All rooms are equipped with a generous bathroom, safe, trouser press, modern communication facilities, satellite TV and mini-bar. Your selection is made easier by the short room description given below: Rooms: 16 Superior Room

22 Deluxe Room Suites 2 Junior Suite 6 Superior Suite 6 Deluxe Suite Rooms and Suites at the "Herrenhaus" and extension 2 Palais Room 5 Palais Junior Suite 3 Palais Suite 1 Presidential (Mariannen) Suite Our largest and most luxurious suite named after Princess Marianne is located on the third floor in the centre of the hotel. Guests enjoy the luxury of beautifully appointed rooms. The connected living and dining area are exquisitely furnished and every little detail has been considered. It is ideal for private receptions and discreet events. Large paintings from Princess Marianne’s era entice the observer on a trip back into history. The large windows provide fantastic views of the Schlosspark, the Schloss terrace, the Rhine and the Mariannenaue. The separated area with bedroom and unique bathroom is a real retreat. The bathroom with its wonderful red Portuguese marble is additionally furnished with a large bath and shower. Apartment The apartment is located adjacent to the main building. The living area, bedroom and the fully equipped kitchen are ideal for a longer stay. Room designed for handicapped guests One of the superior rooms is specifically equipped for handicapped guests. In addition to a spacious room, there is a handicapped accessible shower, handgrips at the wash basin and a second telephone for emergencies, so that hotel personnel are always in easy reach. All rooms, restaurants and event rooms are easily accessible through elevator.