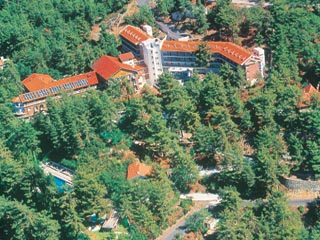 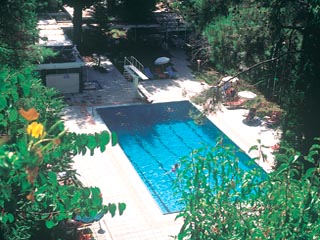 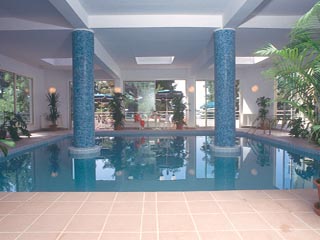 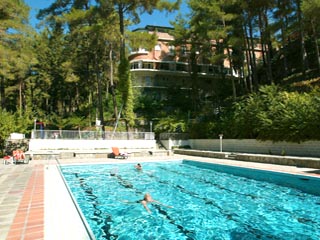 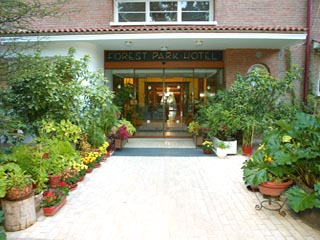 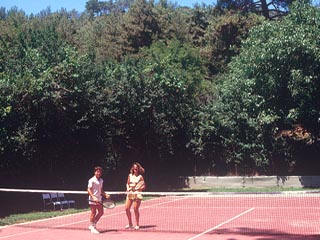 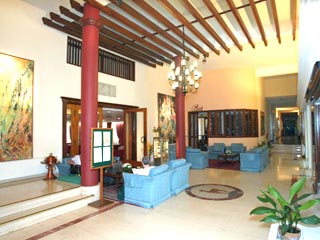 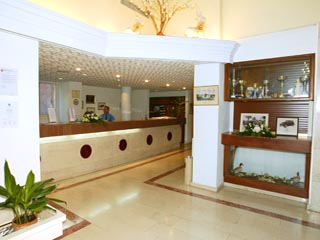 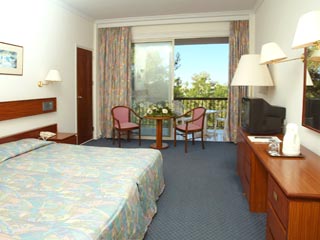 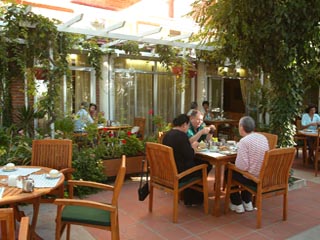 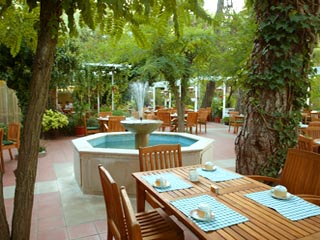 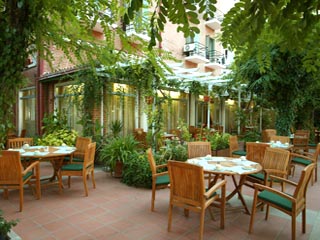 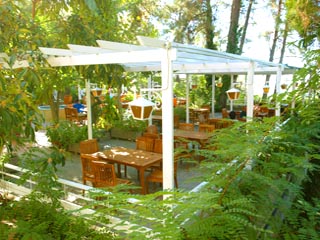 The Forest Park Hotel stands amidst its own 20 acres of Forest and Gardens. Founded by George. H. Skyrianides and officially opened in July 1936, it was then the only hotel in Cyprus able to cater for its clients at International Standards. With its large Ballroom, Dinning Rooms, Bar, Library and Sitting Rooms it was in a position to cater for the discerning clients such as: the late King Farouk of Egypt, Princess Royal Mary of England and many other clients from Palestine, the Sudan and Egypt. In 1936 the author Daphne du Maurier spent one month here with her husband and in that time wrote one of her well known novels "Rebecca". Originally the Hotel had 70 Bedrooms and then in 1948 a further 30 were added, making 100 Rooms. At the time this was a large Hotel for Cyprus. It should be mentioned that during the Second World War the hotel was commandeered as an Army Hospital. It had a similar fate during the Suez Canal Operation 1956, when it was taken to act as Head quarters for the Field Records.

Unfortunately, from the mid-fifties when the King of Egypt was ousted the Mountain Resorts in Cyprus had a very difficult time. They barely opened for a few weeks in the summer. Then in the late 50's the trend charged from the healthy mountain holidays to favoring hot and humid coastal resorts. It was not until the mid-sixties that the British Tour Operators could be persuaded to offer two-Centre holidays, and tourists came once again to the mountains. In the early seventies a Third Floor was added with ten Rooms and major refurbishment carried out. In the early eighties six chalet Suites were built in the grounds, mainly for the Arab Sheikhs - amongst the Leader of Kuwait and Qatar. The Hotel underwent major renovations in the late 80's and early 90's, until its final extension of 54 new Bedrooms and Suites, Indoor Heated Pool, Gymnasium, two Saunas, Jacuzzi and Hairdressing Salon.  The Forest Park Hotel is family run and under the personal supervision of the owners, now in their fourth generation.

Situated on the southern slope of Mountain Troodos 4000 feet above sea level, the Forest Park Hotel boasts a supreme setting on the fringe of the Pine Forest. The Hotel's grounds are quite spectacular and the delicious mountain air is truly invigorating and conducive to healthy walks along nearby fascinating trails.

Platres... a picturesque Resort situated on the Southern slope of Mount Troodos, 4000 f.a.s. level. The climate, its natural beauty and charming position on the pine - clad Hills make it unique in the Island. It is an ideal Health Resort suitable for every season.

Dining Belvetere. Informal dining featuring local cuisine as well as International Cuisine. It opens daily from 12:00 until 14:30 and 19:00 until 22:00 Featuring International Buffet Lunch every Sunday and Cyprus Style Buffet Dinner every Wednesday. It is situated on the Ground Floor with a sitting capacity of 120 seats and with addition of the Indira Ghadhi Salons being able to host another 100 seats.

The Olympus Bar with typical Cyprus decoration is ready to please you day and night with its refreshing cocktails and boast for its Original Brandy-Sour Cocktail since in this Bar the first glass of this refreshing cocktail was prepared for King Farouk of Egypt. Every Thursday and Saturday night there is Piano entertainment. It opens from 10 until 1:00 and is situated on the Ground Floor.

The Hotel consists of 140 comfortable Rooms ( Singles & Twins ) and Suites. Also, there are Baby Cots available Free of Charge.

The Above Special Discounted Rates are inclusive of taxes, services, Breakfast  Buffet and are not valid during the local holidays.

Christmas and New Year Eve Gala Dinner Supplement : 20 Euro for Half Board and 47 Euro per person for Bed and Breakfast

Leave a Review
3Good (Based on 1 reviews)

"good but defenetly not for 90 euros per night"

"the hotel is good but defenetly not for 90 euros per night. the swimming pool for winter was not hot and we couldnt use it. there was very bad ventilation at food areas and we had to change our clothes many times a day. there wasnt mountain view from the food areas. the room was clean with good view but very small."