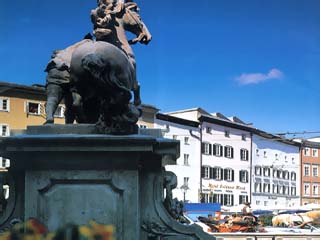 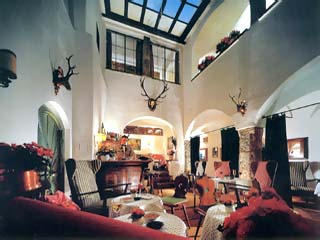 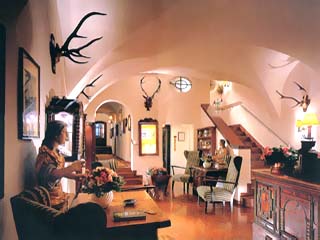 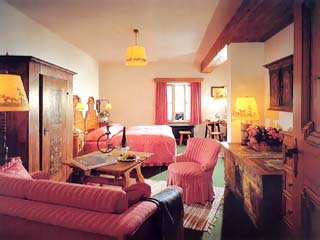 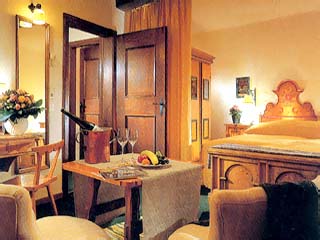 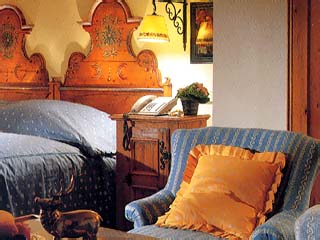 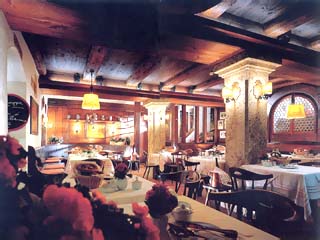 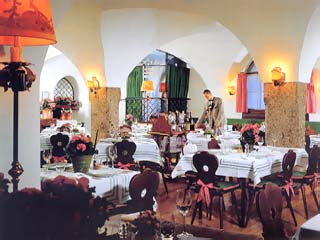 In the baroque centre of Salzburg, City of Mozart, in the famous Getreidegasse stands the Hotel Goldener Hirsch, rich in its tradition of luxury and combining the romantic magic of the 15th century with the luxury of a modern five-star Hotel. The Hotel Goldener Hirsch owes its individualistic charm to its management. Every guest is a friend of the house and is greeted as such with cordial warmth and is served with pleasure.

The Goldener Hirsch Hotel in Salzburg, today meeting-place for the international society, goes back to 1407: Back then the first inn opened it's doors. Since 1564 the name Güldener Hirsch appears. The façades of the old building and the adjoining building, which was acquired in the Seventies, have been kept simple and unobtrusive. Understatement to the outside, luxury only behind the bulky old door. The Goldener Hirsch Hotel is just completely different from all the other world-class hotels, of which it is one. Very unusual was the rise of the hotel when it was opened in 1948 by the Walderdorff family. Harriet Walderdorff made her dream, to be hostess of the international society, come true in an unconventional way. Of course the building was furnished with functional and modern sanitary equipment, but the furniture is antique and had been collected with persistence and connoisseurship by Countess Walderdorff, who had foreseen a trend to be popular only 30 years later. Guests who expect the closet to the right and the bathroom to the left of the entrance have to re-think completely, as all rooms are situated and furnished differently.

The Hotel was in possession of the Walderdorffs until 1970 and their passion for collecting has marked the atmosphere of the hotel persistently. With every step you will discover new treasures: here a painting, there a wooden sculpture, even the bar was made from an antique trunk. Very unique is also the old Refektoriumtisch- an old table from a refectory in a monasetry- which is very popular with our regular guests. Some years ago a historical decision was made here: the location for the new Festival Hall was negotiated at this table, which only documents again the close connection between the Goldener Hirsch and the Salzburg Festival. The interaction of the persistently growing international reputation of the Salzburg Festival and the one of the Goldener Hirsch Hotel has been proved repeatedly in the Fifties. For an audience with high cultural standards, it was an additional incentive to find an international first class hotel in the city of Mozart.

At the same time the Goldener Hirsch Hotel profited from the fact that the artists performing at the festivals, became regulars. This was as well a compliment to the cuisine of the hotel's restaurant, which developed to be renowned not only in Salzburg, but throughout the entire world. The leatherbound visitors book documents the rise of the "Goldener Hirsch" with it's collection of autographs that will not find equal anywhere else in the world. Late Herbert von Karajan's unmistakeable signature was one of the first in August 1949. And although he was said to be unsteady, he was faithful to the hotel for 3 decades. Nach 30 Jahren immer noch"- After 30 years still... Karajan wrote on the last page of the then current book.

In 1976 the hotel came under the ownership of the IMPERIAL HOTELS AUSTRIA AG and since 1998 is able to take advantage of international reservations and management network provided by Starwood Hotels & Resorts. Herbert Pöcklhofer, who assumed the daily management of the hotel from Count Johannes Walderdorff  in 2002, shares his own personal recipe for the unbroken success of the hotel: The Goldener Hirsch Hotel is the epitome of Salzburg hospitality. For decades, an experienced and proven team has been continuing this tradition for international guests and local Salzburg society demanding the highest standards of quality: Each and every guests feels as though he himself were a friend of the house.

In spite of its international renown, the Goldener Hirsch - with only 69 Rooms still a rather small house - has managed to retain the character of an elegant and noble patrician home. This is a fact that the organisers of executive board meetings and seminars know to appreciate, as well as private hosts, who prefer the Goldener Hirsch for individually arranged birthday parties, weddings and anniversary celebrations bringing together an international and cosmopolitan circle of friends. In addition to these, the Hotel's Bibliothek, with its state-of-the-art technical equipment, is also the ideal venue for corporate training sessions, presentations or other similar functions.

For all those who travel by private car, valet parking is available. The guests leave the car, with the luggage in front of the hotel and everything, i.e. parking the car and bringing the bags up to the room, will be taken care of. The Restaurant Goldener Hirsch Hotel with ist Austrian and Interantional specialities is the most exclusiv rendez-vous in Salzburg. The excellent cuisine caters for gouvernment receptions, parties, weddings in castles and other events. Wherever gourmet services and perfectly trained staff are in need, the Goldener Hirsch Hotel will live up to it's reputation. The tavern Herzl has become the place to meet in the city centre. The folkloristic, cosy atmosphere, together with high quality cuisine attracts not only our hotel guests, but also quite a few "real" citizens of Salzburg.

The Hotel Goldener Hirsch is located directly in the city centre and the heart of Salburg's old town, near the house where Mozart was born and close to the famous Festival Hall and all major sights. Therefore it is the ideal point to start for cultural activities, sightseeing and shopping tours.

The reputation of the Hotel and the Restaurant Goldener Hirsch are linked inseperably. The excellent cuisine caters for government receptions, weddings in castles and other events. Where ever gourmet services and perfectly trained staff are in need, the Goldener Hirsch Hotel will live up to its reputation.

The Tavern Hertzi is the more casual Restaurant of the Hotel Goldener Hirsch and has become the place to meet for locals and all international clientele. A favourite Meeting Place of many well-known international personalities is the Green Bar inviting guests to its beautiful covered inner courtyard for aperitifs. It is a must to try the famous drink of the House Susanne, a great taste combined with a story of tradition.

In spite of its international reputation, the Goldener Hirsch Hotel only has 69 Rooms making it a Small Hotel which has kept the character of an elegant private home.

These Special Rates are inclusive of a full American breakfast, and all applicable taxes.

Classic rooms cannot accommodate extra beds, and children to age 11 are FREE only when sharing existing bedding in parents' room.  Quadruple rooms are not available.