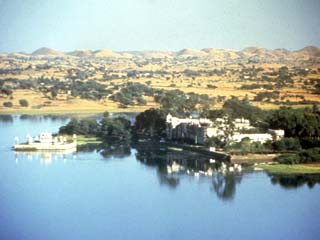 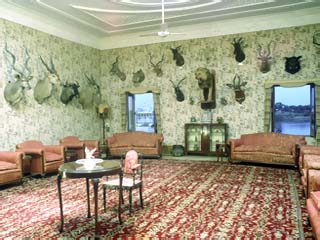 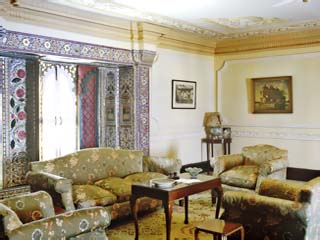 Dungarpur is a picturesque town set amongst the rugged peaks of the Aravalli mountains.

Nestled in idyllic splendor, with the blue waters of Gaibsagar lake on one side and a cove of private reserve forest on the other, Udai Bilas Palace, is the embodiment of the old world charm of princely India.

It is a heaven of peace and tranquility amidst spectacular scenery. The Royal Residence has opened its doors to share its gracious life style with the world.

Dungarpur the, City of Hills,  was founded in the 13th century and rose to fame under the Guhilot Ahara Suryavanshi Rajputs, who trace their ancestry from the elder branch of the main lineage at Chittorgarh. The cousins however came together to fight many a historic battle against the invaders.

The Udai Bilas Palace was enlarged in 1940 by Maharawal Laxman Singhji, who built three new wings around the Ek Thambia Mahal and thus created the famous "courtyard" of the Palace. The result is an architectural expression exquisitely detailed. Dungarpur is full of surprises and promises to be a memorable experience in your journey across India.

Excellent roads place Dungarpur just 25 km. from National Highway No.8 approached either from Ahmedabad or Udaipur.

Ahmedabad airport is just 175 kms. away and Udaipur airport is at a distance of 120 kms. Dungarpur also receives convenient daily trains and buses from Ahmedabad and Udaipur.

The Palace is still the Royal Residence and it offers accommodation in the house guest tradition. The rooms are furnished in the 20th century art deco style. Some of the rooms have the original wall paper, furnishing and marble bathrooms with English fixtures. From suites to guest rooms each enchants with its own personality, spaciousness & modern comforts for a unique experience. The Palace has 20 air conditioned & lavishly appointed bedrooms.

Udai Bilas Palace, has 20 Beautiful Rooms 7 of which are Double, 10 Suites & 3 single Rooms.