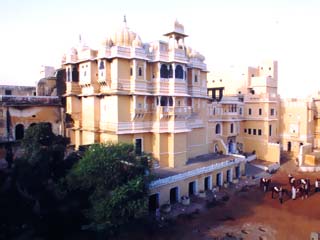 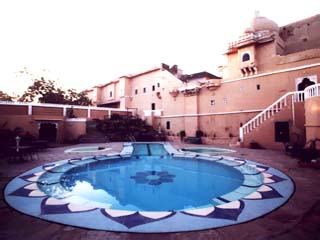 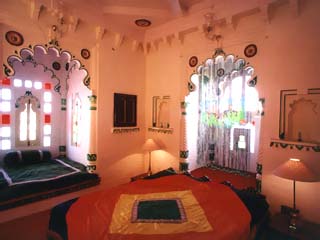 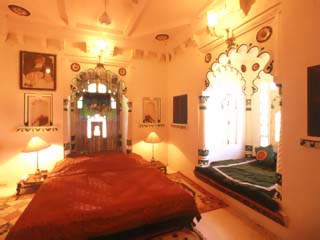 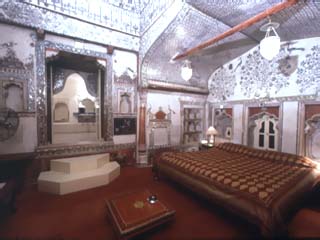 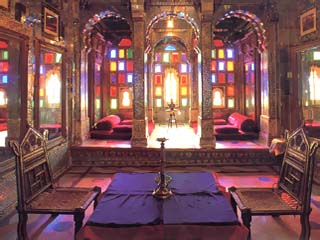 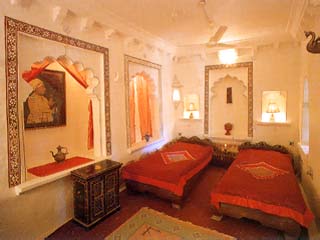 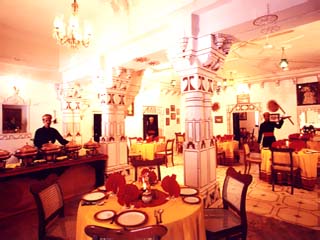 Deogarh Mahal stands proudly on top of a hill offering a commanding view of the Aravalli Mountains and the numerous lakes strewn across the country side.

It is an imposing structure with its graying battlements, domes, turrets, jharokhas & huge gateway. It was built in 1670 by Rawat Dwarka Dasji, whose descendents have converted a part of the fort into a luxurious heritage hotel.

Deogarh Mahal is an imposing structure built in 1670. At a height of about 2100 ft above sea level, it is cooler than surrounding Rajasthan. Built by Rawat Dwarka Dasji as a family residence, it soon became the hub of village activity.

The family interacted with the villagers and invited a host of feasts and festivities to be performed within the Mahal. Some of these traditions are still practiced. And the gates, that always remained closed, to ward off enemies, are now open to the guests. Deogarh lies on the borders of Mewar, Marwar and Merwara, about 80 miles north-east of Udaipur.

Its chieftain known as 'The Rawat' was one of sixteen Umraos privileged to wait upon the Maharana of Udaipur. Such, feudal estates called Thikanas were granted by the ruling Maharana to a nobleman either due to blood relationship or for an act of bravery. Deogarh is also renowned as a school of miniature painting.

Some Deogarh miniatures adorn the personal collection of the present Rawat Sahib. Frescoes of this art form can also be seen on the fort walls.The Mahal also has some exciting rooms to browse through Sheesh Mahal - the colourful hall of mirrors, is just one of them!

Deogarh Mahal is a heritage hotel in Deogarh, Rajasthan. It is conveniently placed, just a few hours drive from the lake city of Udaipur, Kumbhalgarh fort, Chittaurgarh, and Ranakpur. One can make it a base for visiting these nearby places or for going on horse safaris, bird watching, jeep drives, rural rails and to experience first hand, the regal Rajasthani hospitality.

Deogarh is accessible both by rail and road. By rail, it is on the Western Railway Route, between Udaipur and Marwar junction. While driving from Delhi to Udaipur, Deogarh is the right place to break your journey.

Food is sure to be the best at the hotel. Home grown fruits and vegetables, in-house milk products and oils provide a delectable and distinct freshness. You can also flavor typical Mewari cuisine served with traditional hospitality.

The hotel also offers delicious seasonal jams, and juices made from fruits grown around the Mahal. Orange marmalade, plum, and fixed fruit are some of the seasonal jams also available for sale.

Gala evenings, featuring folk music and dance are also organised. Special Dinners are organised for Honeymooners in the Sheesh Mahal in the traditional Indian Style using the family silver crockery

The hotel which has 46 rooms has been restored keeping the old architectural style in mind. The idea was to offer premier quality accommodation while retaining the ambience of the past. The rooms are comfortably elegant, with attached bathrooms and all modern amenities. The guest has a choice of 46 rooms, each with its unique history and folklore. One of the rooms is the ‘Ranjit Prakash Room’ built in 1670 which is a true reflection of Rajput decor at its finest.